Having led the International Organisation of Employers (IOE) for 4 years till the conclusion of his tenure on June 1, 2021, Erol Kiresepi has been elected as the ‘Honorary President of IOE’ at the Organisation’s General Council to be effective as of June 1, 2021.

Mr Erol Kiresepi, Chairman of Board of Directors of Santa Farma İlaç Sanayii, Deputy President of KİPLAS and president of the International Organisation of Employers (IOE) since 2017, concluded his four years’ tenure at IOE, which celebrated its centenary last year, at IOE General Council on June 1, 2021.

IOE General Council has elected Mr Kiresepi as ‘IOE Honorary President’ to be effective as of June 1, 2021 in appreciation of his outstanding global achievements and efforts during his tenure upon the proposal of IOE members.

In his address to the General Council, Mr Kiresepi expressed his satisfaction in acting as the President of IOE during important milestones for global employers including centenaries of IOE and International Labour Organisation (ILO) as well as G20 summits and emphasized that he highly appreciated the robust structure of IOE as a 100-year-old organisation during his tenure. 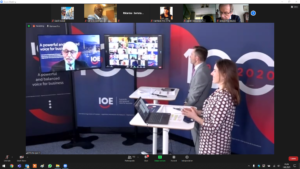 “I’m honoured to be deemed worthy of this important designation”

Kiresepi, IOE Honorary President, noted that they reorganized IOE to make it more dynamic and agile as would be necessary to respond to the current problems and needs of employers in addition to creating new partnerships and collaborations to give a higher voice to employers in wider platforms.

Referring to the achievements in his for years’ tenure, he underlined that he was especially proud to lead the employers who created the entire success by acting together in harmony. Kiresepi assured the members that he would keep supporting this important organisation by acting as a volunteer ambassador of IOE whenever necessary and added that he was honoured to be elected for this important position.

The essentials of your bag are from BEEO!

Attention! You may have Rheumatoid Arthritis…